Amazing is the word to describe the speed and the ability chinese companies have to launch «look alike» projects. While we are still waiting for the iPad to get to our hometown, China is already launching «iPad Flankers» which are devices to good enough to kill the iPad but enough the challenge iPad – Read the  The New York Times article that I ‘m reproducing below or just go to the source here. It is very interesting! 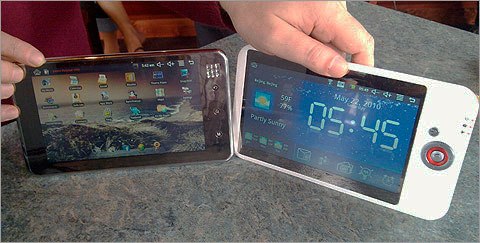 Ashlee Vance/The New York Times A number of iPad-like slate computers have become available in China, including these two systems that are about half the size of Apple’s device.

China has rather quickly emerged as the home of the iPad Flanker.

An iPad Flanker, by my definition, is a device that’s not really good enough to “kill” the iPad but is different enough to challenge the iPad with certain audiences. Most of the flankers seen to date run Google’s Android software, have touch screens and cost less than the iPad.

There are full iPad-size devices like the iWonder from Foxconn. And then there’s a new crop of smaller devices that have just hit the market. These things take the notion of a supersize smartphone to a whole new level.

Richard Brown, a marketing director at the chip maker Via, was kind enough to show me some of the latest flankers that are available in markets around China.

A Chinese company named Eken makes a white 8-inch tablet-cum-slate flanker that is available for as little as $110, Mr. Brown said, and G-link makes a similar device, only black.

Like Android-based phones, these devices have lots of icons on the start menu and handle your basic computing tasks. They also have a type of smart alarm clock/smart photo frame setting that’s handy.

The touch functions are far less responsive than what you’ll find on the iPad, the software is pretty clunky over all and tasks take longer on these products than they do on the iPad. But these devices are super cheap and super light. To me, they actually seemed better suited for watching a movie while you’re laying down, as they’re easier to grip than the iPad.

Of course, the industrial design on some of these products seems lacking. One device looked like it had been attacked by a drunken BeDazzler with its little plastic do-dads arranged on the front screen in a not quite symmetric pattern.

Via, which makes low-power x86 and ARM chips, has found cause to celebrate these devices and others like them pouring out of Shenzhen. The company looks to get its chips into what it sees as a disruptive class of product.

“This is a new market, and China is going to make it happen,” Mr. Brown said. “It certainly remains to be seen, but I think completely new brand names will come out of this tablet market.”

The small Chinese outfits that have spent the past few years learning how to build smartphones have seized on the slates and tablets as an opportunity to lead rather than follow, Mr. Brown added. These companies certainly have diversity on their side, selling devices in all manner of shapes and at prices going from about $100 to $500.

The major computing heavyweights like Hewlett-Packard, Dell and Acer continue to show off prototype slates but are taking their sweet time actually bringing something to market.

That situation may just change next month when the Computex trade show, the computer industry’s annual fete,  kicks off in Taiwan.

Until then, it’s time to celebrate the iFlanker.